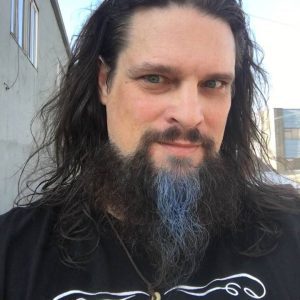 Gideon is a master figurative sculptor with years of experience. He is known for his work on:

Here’s what our students had to say about the NIC Talk:

“Gideon Hayes is a Master Sculptor who has worked on titles such as “X-Men”, “X-Files”, and “Alien vs. Predator”, so having him run a talk was a very exciting prospect. Gideon did not disappoint at all, and I was pleasantly surprised by his humble and sociable demeanor.  If this is how most film and television artists act, then I am even more excited to be in this industry!“

“Gideon’s talk was focused on maquette building and clay sculpting.  He demonstrated the process of building up clay and foil onto a wireform maquette, describing how different types of clay need to be handled differently in order to achieve the desired effect.  He covered everything a student would expect from a sculpting class, including smoothing the clay with an assortment of rakes, describing how to work with polymer clay versus wax-based clay, and even how to construct a makeshift clay oven.  In between technical instructions and terminology, Gideon had many anecdotes to share about the industry.  He discussed his experiences working on different television shows, he offered advice to students particularly motivated to make a career in sculpting, and he recommended shows and films to watch for their outstanding sculpture examples!”

“…He made students feel relaxed, so that as the class went on, students approached him with an increasing amount of questions and stories of their own…he constantly welcomed suggestions from the crowd on its positioning, attire, and character development…Gideon Hay has proven to be not only an accomplished film and television artist, but a fantastic teacher and a warm individual.  I look forward to any future visits from him!”